* FPS limit unblocked
* Multi-threading integration for the 3D objects loading. The objects loading is managed through a separate process, which permits to enhance engine performances and reduce lags. This works very well especially with AMX X2, Intel HT or Dual Core processor.
Some players may feel that objects appear after their avatar arrives in a place, this is the result of the independent 3D objects loading process.
* Optimisation of the engine interface (UI) rendering

* Re-calculation of the formula determining the intensity of the damages. Previously unbalanced, namely for the weapons of the Grand master. 1 &amp; 2, the damages generated by these weapons are today less important and adjusted.
* Addition of new receipts starting from the Master level: 7 new receipts for 4 stages from Master to Grand Master. 1, a recipe per armor type (either Cloth, Leather, Stitch and Flat) and a type per shield (Small, Medium, Large)
* Changes in the Masters’ recipes steps: henceforth, when an object reaches or is created at the master level, it gets in addition to the bonus given by the craftsman and the ingredients, a basic bonus bound to the equipment (only for the armors and shields).
* Addition of basic bonuses on the armors and shields
* Reduction of aggressive distance of some monsters: for 95% of the monsters, the distances now are between 10M and 30m
* Revision of the monsters that could be charmed while they were not supposed to
* Resumption of "the auto-fight" after a repulsion-attraction

In order to facilitate the player’s entry in the vast world of Dark and Light, two starting villages have been worked specially in order to help the players:

* The starting “quested” villages are those of the Humans of Dark and Light
* In these starting villages, 3 masters (FXP, CXP, SXP) have been added and provide all quests of initiation that take the player from level 1 till a level between 10 and 15.
* These quests amount to 42 per village and unlock themselves with the progression of the players.

When the initiation quests in the 3 axes are finished, a final validation quest makes the player travel around his birth village.
Game interface:

* Ingame windows have been reworked: the inventory, the bar of shortcuts, the bar of bags, the Start menu, the bubbles of quests for dialogue, the trade window, the display window of your points of XP (experience).
* You now have the opportunity to filter the names of your enemies on the map by levels.

Display and tools in the game:

* Command « Look for Group »: till now, the search was performed on the whole open worlds of Dark and Light. Today, the search is carried out only on the level reached in the kingdom in which you are found. It also allows you to learn about the alignment of the players you contact.

* Creation of a permanent Market event: Can be reached thanks to the command " /ShowWinEvents", a market place will always be accessible to all players of Dark and Light. It will allow all players to participate when they wish it to the trade on the earths of Ganareth.
* Command / Trade: it allows you to block trade between opposite alignments.
* Al Drifa now welcomes 8 new salesmen who not players, of Master level:
o Sale of formule of handicraft of the tanner, of the armorer, the weaver, the blacksmith and the jeweler.
o A salesman of parchment of property of forts and fortresses was set up. He sells for all the levels of field (Intra Baronies, Barony, County, Duchy, Kingdom).
* Novice players will be able to meet a sport item salesman.

* The Kingdom of Al-Drifa is visible by default on land map for all players.

* Update of the name of the invocations.
* Addition of a new "spell" condition: require the action of a spell on its avatar to throw the spell on the target.

* Correction of an orientation problem with the Dwarf avatar and a link issue the weapons the Dwarf wears on the back
* Adjustment of the NPCs and pets behavior:
o When the pet of a NPC moves too far away its master, it automatically returns to its master’s position. Before, it returned to its position of apparition
o Re-initialization of the pet behavior when it comes back close to its master: it follows him.
* Correction of the invocations of the monsters that didn’t disappear at the time of their death
* Correction of the game’s disconnection when the player was leaving the game with unread contextual messages
* Correction of the critical bug that appeared at the time of the cancellation of the launching of a spell
* The bug which prevented the display of the incantation bar is fixed
* Opportunity to change the owner of a fort at the time of his departure
* The problem of rewarding with an object by a mob or NPC within the framework of a search is now solved; all the items are given to the player. 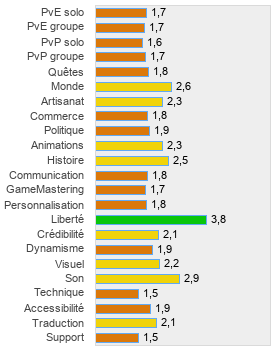